My son and I are trying to hit all the best North Carolina trails over the summer and made a start last weekend with a trip to the mountains. The wish-list was Warrior Creek (conveniently on the way), a day a Beech Mountain and then Rocky Knob on the way home.

We loaded-up and headed out midday on Friday  with the aim of riding Warrior Creek on the way up to Boone. It is part of the Kerr Scott Reservoir trail system and we recently raced in the Southern Classic at Dark Mountain and heard good things about Warrior Creek. We arrived about 3pm which was good and bad timing; bad because it was still in the low 90F’s and humid; good timing – for reasons I’ll get into later. 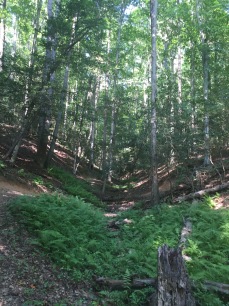 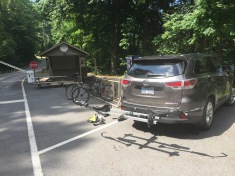 Warrior Creek is a really well-designed trail in a really pretty lakeside location; it’s a mix of hard-pack, rock-gardens and lots of huge, fast berms. There’s nothing too strenuous (even in 90F’s) as the trail mostly follows the same contours – just enough rise and fall to make it fun and fast. There were a couple of large trees down which meant we had to walk a two of the faster sections but otherwise the trail was in good condition.

At about mile 9 you can add the extra 1.6 mile Headwaters loop (Black Diamond) – we opted out because we were out of energy and out of water so we headed back to the parking lot. An unfortunate wrong turn towards the end added a couple of (downhill) road miles.

The trail is great – will head back in the fall and do the whole 18+ miles. The parking lot is worth a 5-star rating in itself – bike (or human) washing station, vending machine and bathrooms / changing rooms.

After re-hydrating, loading the bikes we hit the road – just 45 mins to our campsite near Boone. The first rain-drops started as we left the campground parking lot and within minutes we were in a full-scale storm – driving rain, lightning, trees down – probably the worst weather I’ve driven through. After 90 minutes, we arrived at the campsite unscathed but our camping spot had turned into a small river. With rain forecast until 4am; we put plan B into action and after a bit of last-minute hotel shopping, headed back into Boone for the night – most of which was in darkness due to the storm. Many of the restaurants were closed but we found a decent Mexican on the edge of town that still had power.

My son has been raving about Beech mountain for months – and it really was the main goal of this trip. Beech is pretty typical of the small ski resorts in the area – a couple of chair lifts and half a dozen runs and in the summer you can park right in the village at the bottom of the mountain. There’s also a bike shop in the village where you can rent enduro / XC bikes as well as protective gear. We decided to use our own bikes though I’d probably consider renting to get some extra travel next time – my Specialized Epic took a real pounding – really not made for the kind of terrain at Beech.

All-day lift tickets are $35, $28 for kids under 12. Loading your bikes on the chair-lift is pretty straightforward and there are a couple of guys to help if needed, you ride in the chair-lift behind your bikes and someone unloads your bike at the top; you can also ride down if you break your bike while on the mountain. 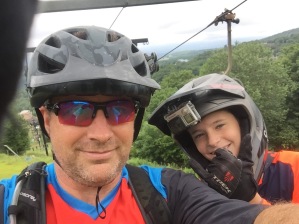 There are 3 green trails, a couple of blues and some black and black diamond – they are interrupted a third of the way down by an access road which allows you to mix and match trails. We mostly stuck to the greens and blues – nice, fast and flowy with a some technical sections – but basically everything was easily rideable; there are a few big drops and tables towards the bottom if you like air. We gave the black and black-diamond a try as well but being in the woods they really hadn’t dried out from the previous days storm – walking / sliding down was hard enough – riding would’ve been suicidal. Gives you some perspective though – these are actual Downhill Championship courses – amazing to see pros. fly down this stuff at full race speed in any condition.

Despite not actually pedaling much – I was surprisingly tired at the end of the day – you’re mostly out of the saddle and on your breaks. We did about 9 runs and a break for lunch in about 6 hours. Fortunately I was able to rehydrate and carb load with a 5506 Pale Ale from the excellent Beech Mountain Brewing Company at the bottom of the mountain and there’s a bike stand and hose to clean your bike – handy if you’re staying in a hotel.

Here’s Jack’s 5 minute video showing the green and blue runs  – starts off slow but the pace picks up about 2.30 as we gain confidence – crank it up to 1080p if you have the bandwidth. You won’t see much of me in the video – as usual – I’m struggling to keep up !

After a lazy morning watching the TDF in bed and breakfast we packed up for our journey home. Just two stops on the way. The first – Grandfather Mountain via a cruise along the Blue Ridge Parkway. It was a beautiful clear day  and you could see forever. The area was pretty busy due to the Highland Games  (who knew ?) – lot’s of red hair and sunburn. 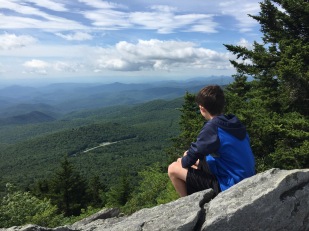 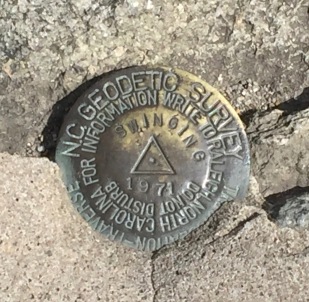 Next stop was Rocky Knob Park  just outside Boone – there’s about 9 miles of trail here and there’s a bit of everything – some short climbs, rock gardens, skinnies, epic downhill, a skills area and pump-track. We only rode about 6 miles on the main trail – we climbed up Middle Earth and Boat Rock stopping at Stone Binge skills area then raced down the aptly named PBJ (Pump, Berm, Jump) – Jack burped a tire so we had to stop for some field-maintenance midway. Trails were in great condition aside from the large fallen tree blocking the last berm on PBJ.

In the parking lot there’s a fun little pump track with probably one of the best views in the state – Jack spent a good 40 minutes finessing his track skills while I chatted with some other riders from all over the southern US.

This is a really well maintained trail system – kudos to the trail keepers – wish it was in my backyard !

We’re planning another weekend in the mountains – would love to hear some more recommendations – Pisgah is on the list – what else ?